The mission of the National Engineers Week Future City Competition is to provide a fun and exciting educational engineering program for students in grades 7 and 8. Future City combines a stimulating engineering challenge with a "hands-on" application to present their vision of a city of the future. This will be accomplished by:

The Future City Competition is a national, project-based learning experience where SPC students in 7th, and 8th grade imagine, design, and build cities of the future. Students work as a team with an educator and engineer mentor to plan cities using SimCity™ software; research and write solutions to an engineering problem; build tabletop scale models with recycled materials costing no more than $100; and present their ideas before judges at Regional Competitions in January. Regional winners represent their region at the National Finals in Washington, DC in February.

Congratulations to the 2018-19 Future City Team on winning 1st place at the Chicago Regional Competition!

There are five deliverables to the competition. The first deliverable is a Virtual City designed using Sim City software. The next part is a 1500 word Essay. The topic of the essay this year was “Powering Our Future.” Students wrote about a city 100 years in the future which survived a natural disaster, yet retained its resiliency due to the type of power grid in the city. The next deliverable was building a physical model of the city using recycled/recyclable materials within a $100 budget. The model also had to include at least one moving part. This year the model had a section with a simulated earthquake, a rotating vertical farm, a hover pod that traveled through the city, and a terminal for the underground transportation system. Simultaneously, students prepared a 7-minute Oral Presentation - at this point only three students are allowed to present. Our presenters were Juliet D., Megan B., and Joseph R. The last deliverable was the Project Plan which also included a reflection on the learning and experience gained by the students.

The name of this future city is Hiko Pa, located in New Zealand. Hiko Pa means “Electric City” in Maori from the native people of New Zealand. This city survived an 8.5 level earthquake without damage due to its wireless power grid and innovative carbon fiber rods and tethers on the buildings. The wireless electric grid system proposed by the team won a Special Award for the team: “Best Electrical/Electronic Solution for Improving the Quality of City Life.” Another aspect of the city, the Tere Tere, which means “Floating Train” in Maori, is an underground maglev train for people as well as delivery of goods and removal of waste. Because of the Tere Tere the team won a Special Award “Most Innovative Design of Municipal Services.” When you see the physical model of the city you will know why the team also earned a special award for “Most Innovative Structures.”

The team also won the award for Best Essay. The last award given out at the ceremony was for 1st place Team Overall! Students are all thrilled to have won and know they will try their best to do well in DC in February.

The team will also be attending the prestigious Washington Award banquet in February at the end of Engineering Week.

The team is mentored by Mr. Michael Dompke, an SPC parent and mechanical engineer, and teachers, Mrs. Moran and Mrs. Stypka. The team has worked very hard and we wish them the best at Nationals.

Congratulations to the 2017-18 Future City Team on winning 1st place at the Chicago Regional Competition!

The Future City competition is a project-based engineering competition in which middle school students try to solve a given problem and incorporate the solution into a city of the future. This year the problem was to identify an issue that older citizens may have currently and then design two innovative futuristic engineered solutions to solve the problem and allow the older citizens to remain active and independent.

Students used the Engineering Design Process throughout the elements of the competition. First they designed a virtual city using SimCity software, wrote an essay on the topic, built a physical scale model of part of their futuristic city, and presented their findings in a 7-minute oral presentation in the form of a skit, after which they answered questions from experts in various engineering fields.

After surveying 100 SPC grandparents in October and learning about various issues through other sources, the students settled on social isolation as a main problem. Mobility, loss of friends or relatives, and fear are just a few possible reasons for social isolation. The students decided after some research that exoskeletons, with the right engineering, could help someone who has difficulty walking. Another solution was a robotic companion who looks and sounds very lifelike, again possible through engineering.

What is the name of this amazing futuristic city? Happyville! Home of the World’s Largest Smiley Face!

The team was so excited to win first place in the Illinois (Chicago) region!!!  The team also won Best Virtual City and Best Essay as well as a Special Award for Best Land Surveying Practices. To accomplish this, they met every Monday for three hours, spent time outside of regular meetings to work on the project, went on a field trip to learn about robots, and even came to school during on days off to finish everything. Before they went in for the final presentation, the students spontaneously formed a prayer circle to thank Jesus for having let them get this far.  What a great bunch of kids!

The team will travel to Washington, D.C. in mid-February to compete against 44 other teams including some from Egypt and China.

Congratulations to the 2016-17 Future City Team on winning 3rd place out of 34 teams at the Chicago Regional Competition! 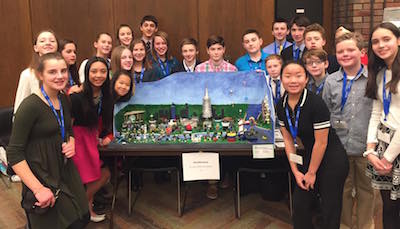 The Future City theme this year is “Power of Public Spaces”, challenging teams to design a network of innovative, multi-use public spaces throughout their city that serves the city's diverse population.

Together, they work as a team and use SimCity™ software; research and write solutions to an engineering problem; build tabletop scale models with recycled materials costing no more than $100; and present their ideas before judges at Regional Competition.

In January, 2015, the SPC Future City team made history by becoming a “three-peat” first place winner in the regional competition in Chicago. Winning first place in the region allowed the team to compete at the national level in Washington, D.C. against 37 other teams, including one from China! Our SPC team placed 11th in the nation. We are very proud of the whole team. Our school team consisted of 10 seventh and eighth graders: Students pictured from left to right: Roberta S., Adan M., Elizabeth B., Triona O., Brendan K., Jared L., Charlie R., Aiden J., Ian C., and Angelica L. Educators Mrs. Christine Stypka and Mrs. Laurie Moran lead the students with engineer mentor Mr. Philip Spagnolo.

To see the project assignment for this year, please click on the link to see the video.